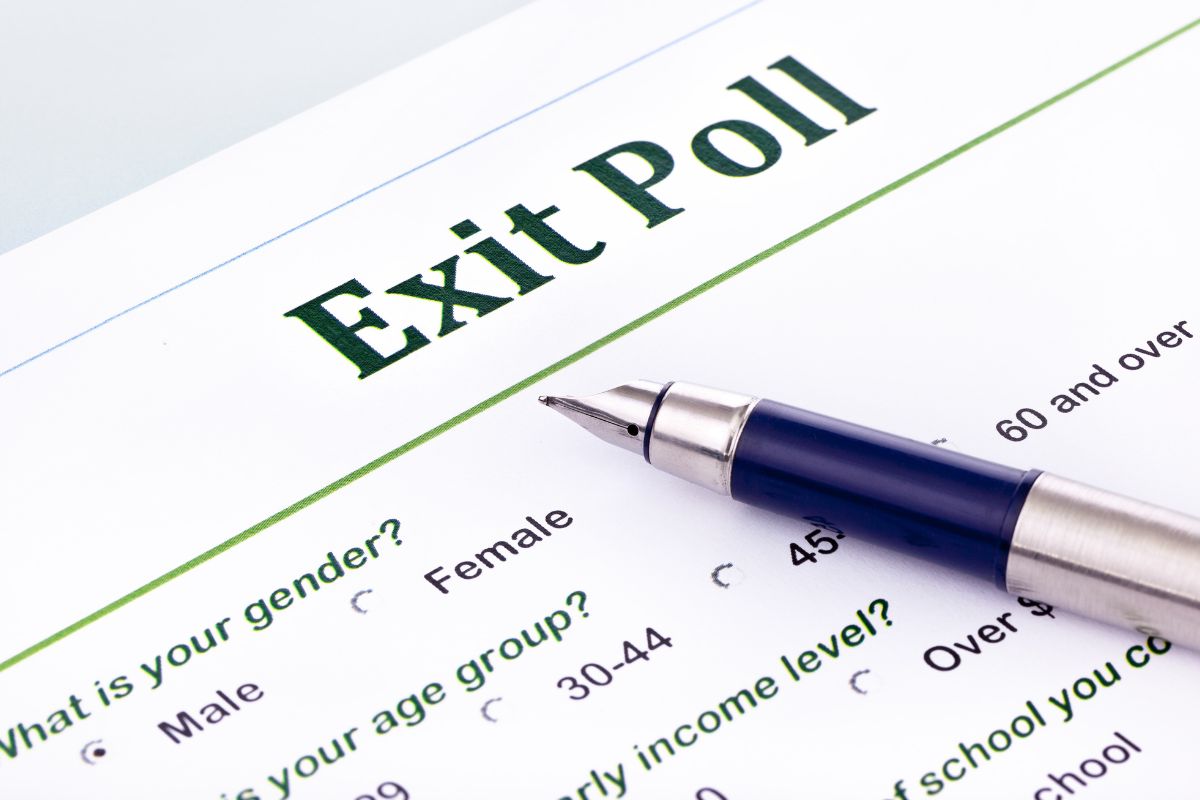 If you have watched coverage of any election before then you will have probably heard the presenters speaking about something called an exit poll.

Contents show
1 How Are They Conducted?
2 What Are The Voters Asked?
3 How Accurate Are Exit Polls?
4 Do They Account For Early Voters?
5 How Did COVID Affect Exit Polling?
6 When Do They Get Reported?
7 Final Thoughts

During the 2020 election the coverage spoke a lot about exit polls. But what is an exit poll and what is it used for?

An exit poll is a survey that is conducted by asking for voters’ intention as they leave their polling station that takes place on the day of an election.

Sitting outside of a polling station and asking the people leaving almost ensures that you get a direct view into who they are voting for and which candidate is winning in that area.

The most important question of who will win the election is most of the time found from the exit polls (You might also want to check out What Rasmussen Polling Is?).

How Are They Conducted?

Exit polls are conducted more easily than you would think.

All that is required is for interviewers to be placed outside of randomly selected polling stations across the country and then they approach the voters at intervals when they leave the place.

This can be the first person out and then waiting for the sixth person to ask again. Voters who participate in the exit poll are required to simply fill out a questionnaire that is completely confidential and then place it in the ballot box.

The people interviewing the voters will phone in the current results three times throughout the day.

If a voter decides to not participate in the exit poll then the interviewer will need to note down the person’s approximate age, race and gender of the voter the information is then used to adjust the exit poll to make sure that the voters are represented fairly in the final results that are published later.

What Are The Voters Asked?

The questionnaire obviously asks the voter who they voted for but this is not the only thing they are asked to answer. They will be asked for their demographic, that includes their race, gender and age.

They can also be asked some questions on their opinions surrounding important issues. In the 2020 exit poll there were several questions with one of them being:

Do you think the condition of the nation’s economy is:

How Accurate Are Exit Polls?

Like other surveys exit polls are also subject to non sampling (Also check out What Are Sample Surveys?) and sampling errors.

News organizations will always make sure to compare the results to the pre election polls and the history in the precinct of the way it has voted in the past.

The statisticions and political experts will also review any of the data.

Once the polls do close then the exit poll result will be weighted with the proper election votes to ensure some more accurate data.

The poll will be used at the beginning of the election cycle to project the winners of some campaign races where the gap between the candidates is much larger than others where they will wait for actual votes to be counted before making any assumptions.

Most elections are projected from the actual data coming from vote counters but exit polls can and are usually an indicator of the direction that the people are leaning.

Most of the time they are correct in predicting the outcome of the election however as was seen in 2016 even the clearest of polls can still be wrong.

Voting through mail or voting early has become much more popular over the recent years in the 2016 election cycle a staggering 42% of Americans decided to vote early before Election Day by using any forms of early or absentee voting.

During the 2019 election there were 93 million early ballots casted in the election.

Exit polls will miss people who voted before the day of the election. It’s however important for them to be included in the data for there to be the most accurate information about all the voters.

The exit polls include people who vote as absentee or early in two different ways. Firstly be making some phone calls to people who have been known to either vote absentee or vote early.

Secondly in certain states with a larger number of people who choose to vote early in person the exit polls are conducted in the weeks that lead up to the day of the election.

They will speak with the people leaving in the same way that they would on the actual day itself.

During this process data will be collected from the telephone polls and exit polls from just the early voters are then combined with the exit polls from election day to give a clearer picture that shows the intention of voters regardless of when the person voted.

How Did COVID Affect Exit Polling?

There have been changes to some of the procedures used for exit polling that were modified during the COVID pandemic so make sure that all involved being the voter and the interviewer.

With the standard exit poll the interviewer will approach the voter and give them the questionnaire and a pen to allow them to fill it in.

This old approach was changed and all involved must be wearing a mask at all times, keeping a six feet distance between them and the voter.

The voters who do agree will be taken to a table nearby where the questionnaires are already laid out along with a single use pencil for them to fill in the form with.

Along with the pencil and questionnaire there also will be some hand sanitizer, wipes and the disposable gloves made readily available for both the interviewer and the voters wishing to fill in the forms.

The idea was tested successfully during the primaries.

When Do They Get Reported?

The exit poll data is embargoed until later in the day so in Easter Time they will be reported typically at 5:45 pm with only the initial data about demographics of the voters and their views on the issues raised when filling out the questionnaire will be reported.

Once the polls end up closing only then will the full exit poll data start to be reported and placed online. A winner in the race is usually not projected until after the last scheduled poll closing time in every state accordingly.

If the race is not a projection at the closing time of the poll then the official projection will bring in some of the actual voting data and is made as soon as the data warrants.

Exit polls are a crucial part of the election process and give us the early insights into the way that the country is intending to vote and who they wish to win local primaries all the way up to the person who will be leading the free world for the foreseeable future.

So next time that you are watching the election make sure that you keep a close eye on the exit poll and if you are asked to take part in one then you can be a part of a piece of history.